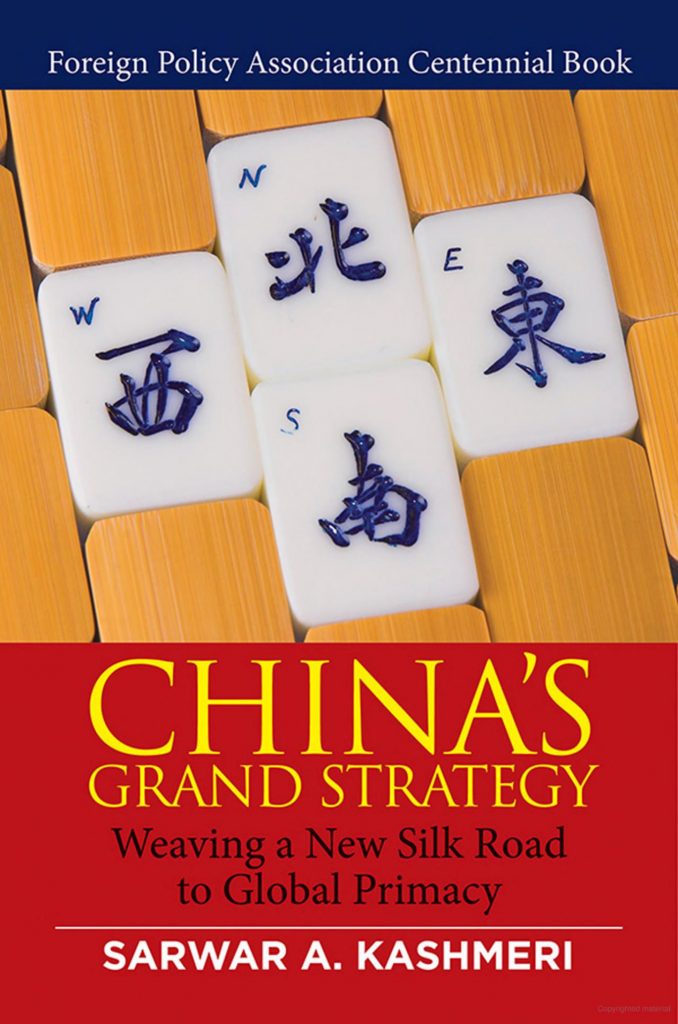 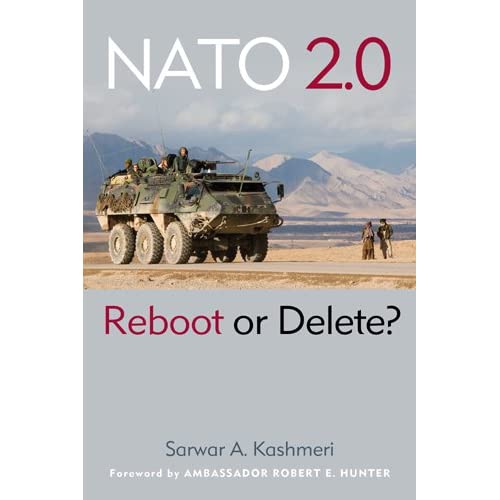 In this book Sarwar Kashmeri argues that NATO’s historic function has been largely taken over by the European Union’s security alliance and says that if it is to survive, NATO must take on a different role. 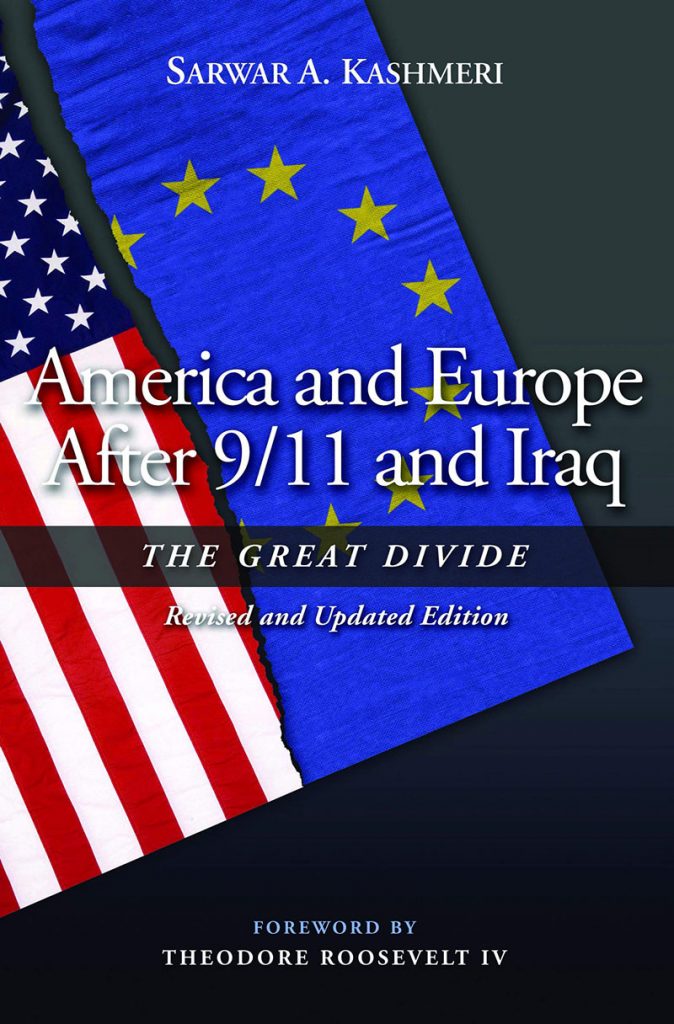 America and Europe After 9/11 and Iraq, The Great Divide

This book proposes a new approach to U.S.-European relations; and places the rift between the U.S. and Europe in the context of the emergence of the E.U. as a major power. 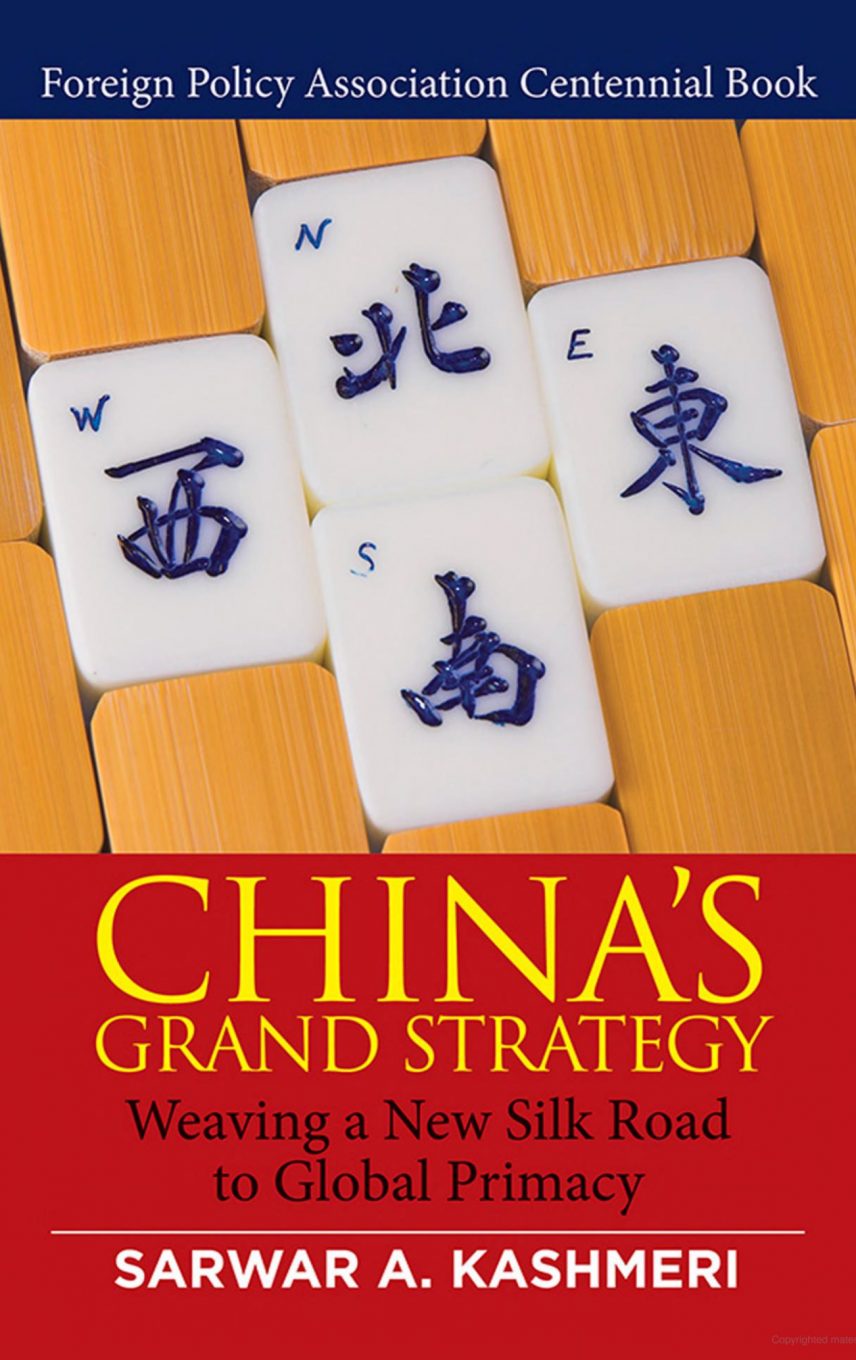 In the “Great Game” of the 21st century―gaining leadership and influence in Asia―the United States is rapidly being outflanked by China, which is investing in infrastructure, connectivity, and supply chains on an unprecedented global scale.

In this first book to use China’s Belt and Road Initiative, previously known as China’s New Silk Road, as a point of departure to explain why and how China is about to supersede America with regard to influence in Asia, Sarwar Kashmeri argues that the United States has a narrow window of opportunity to find a way to fit into a world in which the rules of the game are increasingly set by China. U.S. opposition to the Belt and Road Initiative is doomed to failure, so America must find creative ways to engage China strategically, and he warns that the window to do so is closing fast.

The Belt and Road Initiative is China’s ambitious project to connect itself to more than 70 countries in Central Asia, Europe, Africa, and the Middle East through new roads, rails, ports, sea lanes, and air links. This cornerstone of Chinese foreign policy under President Xi Jinping is positioning China at the center of over half of world trade, and the loss of American influence and power could well lead to the end of the postwar liberal world order.

Far more than merely an infrastructure investment, the Belt and Road Initiative is a masterful grand strategy to create nothing less than a new world order based on the Chinese model of government and its financial institutions. Yet, as the passing of the baton of world leadership takes place, the United States seems curiously incapable or uninterested in devising a counterstrategy. Even though the United States will no longer have the largest economy in the world, it will still be a powerful and rich country with global alliances.

• Explains the Belt and Road Initiative, including its historical roots, sources of funding and the financial and aid institutions being set up by China to subsidize and underwrite the projects

• Describes in detail the most strategically important BRI projects, with the projects’ scope, cost, and strategic impact

• Evaluates the cultural, religious, and economic dangers of each of the key projects that China will have to overcome in order for the BRI to succeed 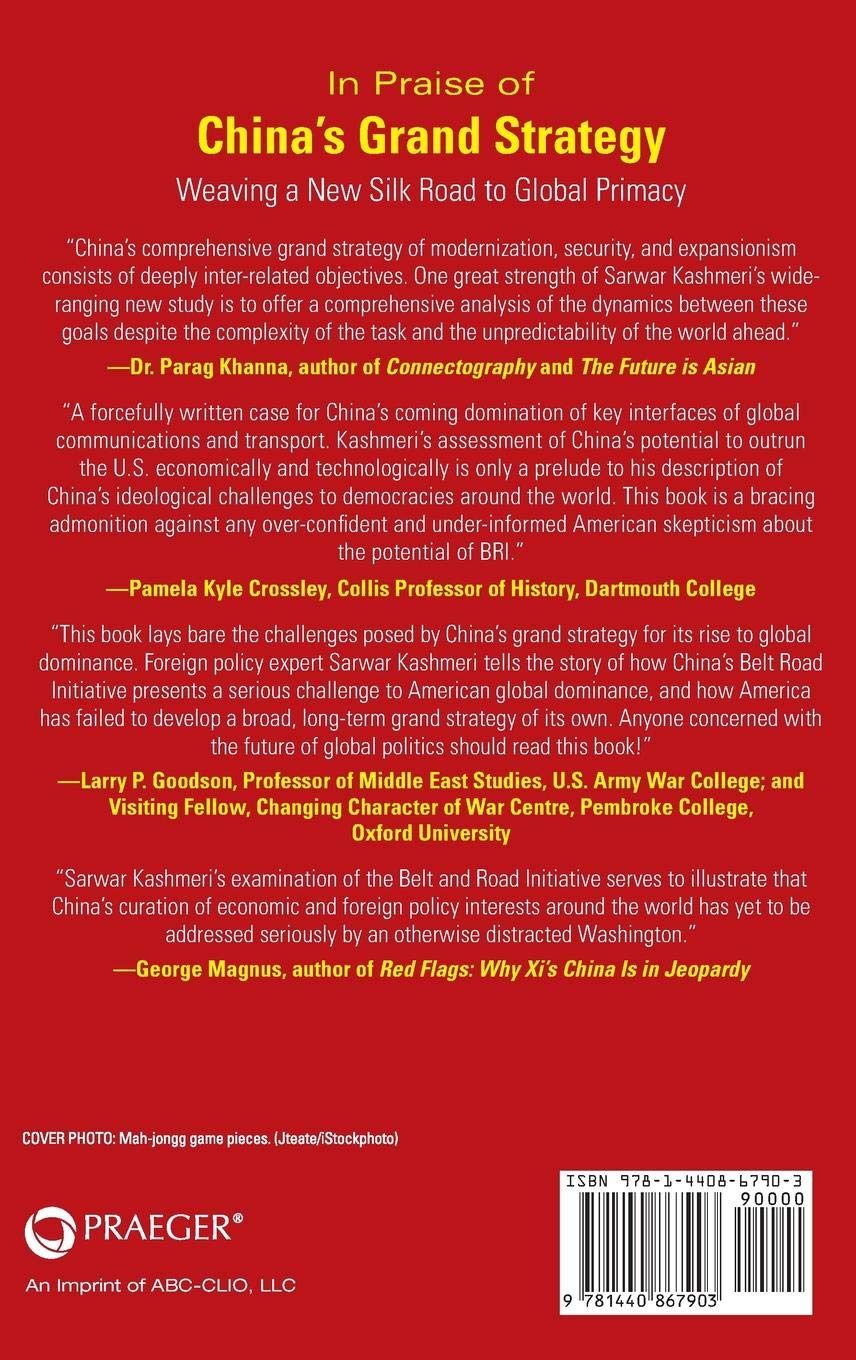 Professor Kashmeri gives interesting details of China's "New Silk Road" strategy of challenging the Western domination of East. At the same time how it would boost the Chinese economy to rise to overtake the US economy. This book is an easy read to understand how China rose from one of the poorest countries on earth to one of the richest. It is destined to become the most powerful and influential country in the world. Professor Kashmeri gives material to the reader who wants to learn the grand strategy of China's transformation goal to become the twenty first century world power.

As a westerner who cherishes the freedoms of western-style democracy, I felt a sense of dread as I began reading this book. In the midst of rising nationalism, tribalism, income inequality, strongman leaders, and now a pandemic, democracy is on the ropes all around the globe. And to solve these problems, here comes China, offering itself as a successful role model -- an authoritarian, anti-democratic role model.

Yet as I continued reading, the book itself convinced me not to toss it aside in despair. The writing is conversational. The book isn't long, either, and is broken down into easily digestible bites. But what really kept me turning the pages was Kashmeri's broad experience combined with his deep connections in the worlds of business, foreign policy, and the military. That has equipped him to deliver eye-opening, nitty-gritty inside details while also stepping back to provide the context that makes it clear why those details matter.

By the end of this quick read, Kashmeri's pragmatic, strategic suggestions for the future had me convinced that there IS a path forward that doesn't require the west to beat back China in order to avoid our own ruin. How we engage with China will affect the daily lives of everyone around the world, whether we regular folks realize it or not. It strikes me that this accessible book gives voters a critical guide for what to look for in the leaders we choose, because those leaders will decide which road we take -- toward a stable sustainable future... or toward inevitable decline... or an unintended detour into disaster.

On September 5, 2009, the commanding officer of NATO’s German troops in Afghanistan ordered a U.S. Air Force fighter to destroy two fuel trucks hijacked by the Taliban. Within hours, he was being investigated by German prosecutors for the murder of innocent civilians—collateral damage. Under German law its forces can only be deployed for peacekeeping; America might be at war in Afghanistan, but Germany is not.

Germany is not the only country that sets strict conditions on its NATO troops. Half of the allied forces in Afghanistan operate under restricted battlefield conditions. Gen. Dwight Eisenhower stormed the beaches of Normandy with an Allied army that followed his every command; in Afghanistan military commanders must consult a checklist to figure out which allied soldiers can be sent into battle.

NATO today is a shadow of what it used to be—the world’s most formidable military alliance. Its original reason for existence, the Soviet Union, disintegrated years ago, and its dreams of being a world cop are withering in the mountains of Afghanistan. But eliminating NATO is not the answer, argues Sarwar Kashmeri. It is, for Americans and Europeans, still the safety net of last resort. Kashmeri believes NATO’s future usefulness depends on its ability to partner with CSDP, Europe’s increasingly successful security and defense establishment. It is time for NATO 2.0, a new version of NATO, to fit the realities of the twenty-first century.

Arun P. BhagwatNATO 2.0-Highly recommended reading
Read More
If you're a lay person or a government policy maker in any country, particularly in Europe or North America, and have any interest at all in questions of defense policy, planning or strategy, this book should be on your "must read" list. Sarwar Kashmeri takes the reader through a wonderfully researched analysis of NATO-its history and where it is today, and offers compelling arguments for designing a plan to bridge NATO and CSDP(the European Union's crisis management establishment) into an effective deterrent organization for today's real threats around the world. His painstaking research and illuminating interviews with an amazing number of current world leaders, and his resulting analysis and roadmap provide a clear path to an organization that will benefit not only the Trans Atlantic Alliance countries but has relevance to governments around the world. Highly recommended.
TottaWhither NATO? This book helps answer that question...
Read More
Sarwar A. Kashmeri's many sources at NATO headquarters provide a look behind the public discussions and an international view of NATO that is particularly enlightening for U.S. readers. The author reports then Secretary-General Lord Robertson's stunned reaction in September 2001 when the U.S. declined NATO assistance against the Taliban. The U.S. launched its Afghan war October 7 with a light footprint--cowboys on horseback and aerial assaults--quickly routing the Taliban. A decade later, the Taliban is back, aggressively undermining NATO's attempted stabilization of Afghanistan.
Previous
Next

America and Europe After 9/11 and Iraq, The Great Divide​

American foreign policy toward Europe is merrily rolling along the path of least resistance in the belief that nothing is really amiss with the European-American relationship that multilateralism will not fix. Not true, contends Sarwar Kashmeri, who argues instead that the alliance is in intensive care, cannot be fixed, and must be renegotiated to accommodate Europe’s emergence as a major power. A kind of United States of Europe, with foreign priorities different from those of the United States, has arrived at America’s doorstep. But America still forges foreign policy for Europe using Cold War realities; both Democrats and Republicans expect the European Union to fall into step and report for service as needed―under American leadership.

Europe, however, has other plans, and as it becomes more powerful on the world stage, competing visions of European leadership have emerged. Kashmeri offers prescriptions for forging a new alliance based on a “special relationship” with the European Union. This agenda is inspired by those leaders who spoke to the author specifically for this book, among them former president George H. W. Bush, former British prime minister John Major, James A. Baker III, Wesley K. Clark, Brent Scowcroft, Paul Volcker, U.S. senator Chuck Hagel, and Caspar W. Weinberger. With a foreword by Theodore Roosevelt IV, the managing director of Lehman Brothers, a New York investment banking company.