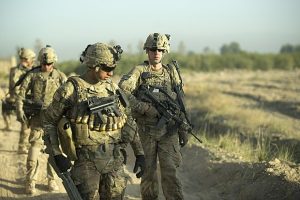 NATO was set up 64 years ago to defend Europe against the Soviet Union. The North Atlantic Treaty that created the Alliance hitched the United States’ military might to the defense of Europe and ring-fenced the Soviet empire until it collapsed, leaving Europe without any significant threat. Thanks to European industry and NATO’s defense umbrella, Europeans rebuilt their US Army soldiers behind a designated mine-detecting device operator in an area notorious for IED caused injuries and deaths. (Tony Karumba/AFP/GettyImages)countries from the devastation of World War II, created the European Union and built of the largest economies in the world.

But NATO also left two corrosive legacies on the transatlantic allies: Europeans became accustomed to getting their defense on the cheap via the U.S. taxpayer; the United States has drunk deeply from the jug of “leader of the free world” and has difficulty passing even a regional baton to the Europeans. The result: an anemic European security establishment that is regularly criticized by American leaders.
Witness the Libyan war, in which European military forces could do little against the middling power of Mummar Qaddafi until the United States deployed its high tech weaponry to bail out its allies, in their backyard, at a cost to the U.S. taxpayer of $1 billion. Can this unbalanced division of labor in which one NATO member, the United States, is permanently responsible for the protection of 26 European countries continue to be viable forever?

Given the massive cuts to the U.S. defense budget looming on the horizon and America’s “pivot to Asia,” we don’t think so.

Let’s first correct the commonly held, but erroneous, perception in America that the Europeans do not spend enough on their defense. Even after the recent cutbacks, NATO’s European members’ annual defense spending tops $250 billion dollars, almost equal to the U.S. defense budget prior to 9/11. A huge sum considering that the Europeans have no interest in policing the world.

It is not that the Europeans do not spend enough on their defense, they just spend it inefficiently on duplicate military procurement programs and acquisitions that benefit individual countries rather than contribute to a Europe-wide defense profile. Can the Europeans ever think in terms of a European defense profile? We believe they can, but it will take a dose of tough medicine from Washington to point them in the right direction.

Twenty years ago the EU set up its Common Security and Defense Policy to create an autonomous military capability for Europe. Over the last 15 years, it has deployed some thirty overseas missions – some of them quite robust, such as the brigade (3,700) size EU force sent to Chad in 2008 at the request of the United Nations. The mission was sustained in the middle of Africa for some 14 months and protected half a million refugees, using firefights when necessary.

These deployments demonstrate what can be achieved by Europeans when they decide to define and defend their collective interests. But, for a variety of reasons, including strong initial objections from the United States to the European CSDP initiative, a fear of rocking the NATO boat and angering its American underwriters and reluctance to leap into the unknown of handling its own military affairs, after an initial burst of activity, CSDP has been marking time. NATO, meanwhile, has degenerated into a mechanism for generating coalitions of the willing.

Because the bipolar constraints of the Cold War dictated tight solidarity between all Alliance members, the original NATO truly was an alliance as traditionally understood. But now, post-1989, in the absence of any existential threat, regional crises impact NATO member states in very different ways, and they are freer to pursue their own interests. Consequently, there is little likelihood of unanimity.

What about all the talk from NATO headquarters about a global role for the Alliance, the long- time American preference? It has never found favor with Europeans and has probably been administered the coup de grâce by their experience of Afghanistan, which, however strong the official spin may be, is almost certain to be judged by history as a military and political failure.

It is time to re-think the relationship between CSDP and NATO. To move the CSDP-NATO conversation forward and to generate debate, we would like to propose the following agenda:

As part of the U.S. defense budget trimming exercise, the U.S. Congress should make it clear that within a specified number of years America expects that the responsibility for the defense of Europe and its periphery will be assumed by the EU, with Americans acting largely as force enablers for a transitional period.
The United States should progressively turn over the leadership of NATO to the EU by replacing Americans with Europeans in key NATO positions.
NATO’s “Board of Directors,” the North Atlantic Council, was designed for a world without the EU and consists of permanent representatives from individual European countries. It should be recast to include one representative each from the EU, U.S., Canada, and from each non-EU member of NATO such as Norway and Turkey. This reformed body would serve as the transatlantic military link, while the EU’s Political and Security Committee would assume the NAC’s functions for Europe area operations and decisions.
Imagine how different the international reaction to the crises in Libya, Mali or even Syria might have been had these modifications to the transatlantic security architecture been made immediately after the Cold War. A robust CSDP/NATO entity would have given the EU the muscle and the institutions to lead in its own immediate neighborhood, with the United States in a constructive supporting role.

It is time for Europeans to stop believing that the transatlantic defense and security equation cannot work without U.S. leadership and time for the U.S. to accept that it does not have to lead everywhere in the world, and certainly not in Europe where its closest and richest allies dwell. NATO has been the jewel in the transatlantic crown but it is time to tailor it for the new century.

Sarwar Kashmeri is a senior fellow at the Atlantic Council’s Brent Scowcroft Center for International Security and an Adjunct Professor at Norwich University.

Dr. Jolyon Howorth is a Visiting Professor of Political Science at Yale, and Emeritus Professor of European Studies at the University of Bath (U.K.).